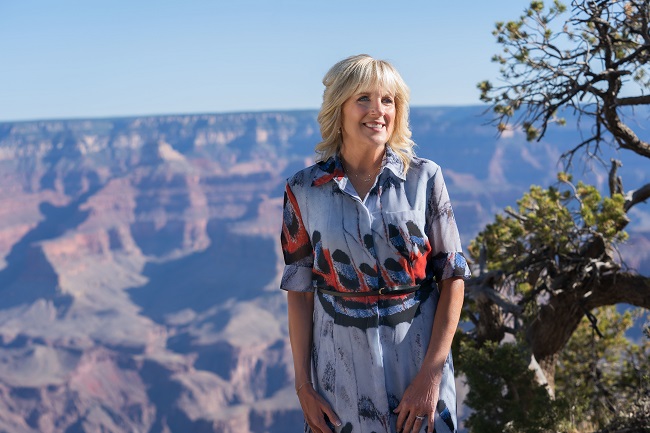 FIRST LADY OF THE UNITED STATES DR. JILL BIDEN TO INTRODUCE SERIES FROM THE GRAND CANYON.

This summer,aspart of its new annual America’s National Parks Week event,National Geographic is taking viewers on an extraordinary venture across world-famous and lesser-known national parks to reveal the diversity and wonder of the United States. The five-part documentary series from the award-winning producers of “Planet Earth,” AMERICA’S NATIONAL PARKS — narrated and executive produced by singer and songwriter Garth Brooks (No. 1-selling solo artist in U.S. history) — premieres Aug. 29 at 9/8c over five consecutive nights on National Geographic. All episodes will also be available to stream on Aug. 31, exclusively on Disney+.

Each night features remarks from the first lady of the United States, Dr. Jill Biden, as she kicks off the series with a special message about how each national park connects people to a piece of the American story. Additionally, in participation with the White House’s Joining Forces Initiative, National Geographic will premiere a PSA throughout the five-night event in which Dr. Biden shows appreciation for our military community and reminds current service members and their families, veterans, and Gold Star families of their free entry into all national parks across the country. Finally, on the closing night, Dr. Biden gives an uplifting message that highlights the wondrous parks and animals showcased throughout the series.

Dr. Biden said as part of her introduction to the series, “America’s national parks are full of unrivaled natural beauty, geological wonders, cultural history and amazing wildlife. Each national park connects people to a piece of the American story — who we are and where we came from. With at least one national park in every state, all Americans can enjoy them. Some are close to home, [and] others require a little more planning and travel, but however far you choose to go, national parks connect us to the wonder and renewal of nature, helping us discover more about our country and ourselves. America’s national parks belong to all of us, so I encourage everyone to go out and enjoy them.”

AMERICA’S NATIONAL PARKS is an immersive, deep dive into the grandeur and beauty of the treasured landscapes that make up our collective national jewels. From the lush valley floors of Yosemite to the fiery, constantly erupting volcanoes of Hawai’i, these wild open spaces are home to amazing animal inhabitants, from some of the biggest bears on the planet to some of its toughest newts. Each one thrives in the nuanced ecosystems of these cherished parks. Some are seen in intimate glimpses, and others are television firsts, such as the elusive Mexican long-nosed bats feeding at night on the agave plant in Big Bend National Park.

National parks are a part of the cultural DNA across the U.S., which has more diverse landscapes than any country in the world. From the deeply cut chasms of the Rio Grande to a 75-million-year-old sea of grass that was once an inland ocean, AMERICA’S NATIONAL PARKS devotes each episode to illustrating the ever-evolving landscapes and wildlife inhabitants of five national parks.

Streams Aug. 31 only on Disney+

Grand Canyon National Park is a high-rise haven sculpted by the elements where all of life is connected. Following the cycle of seasons from winter to fall, explore the secret depths of the world’s most famous natural wonder. At every elevation, from rim to riverbed, the park’s wild inhabitants carve out a niche that gives them an edge in this ancient arena.

Badlands National Park is a land of rugged beauty, 75 million years in the making. Found in South Dakota, its heart is a sea of grass, making up one of the most endangered ecosystems on the Earth. This park is also home to iconic rocky spires carved from the ground by wind and rain. Among the grass and stone are some of America’s most iconic species, who have evolved together to benefit each other.

Witness the natural wonders of Hawai’i Volcanoes National Park, a sacred land born of fire and sea. Home to the most unique assemblage of species anywhere on the planet that navigate living in the ever-changing landscape shaped by the world’s most active volcanoes. From humpback whales to carnivorous caterpillars, this episode reveals the largest and most ecologically diverse wilderness in the Pacific Islands.

Accompanying the series, National Geographic Books recently released 100 Great American Parks, by Stephanie Pearson (National Geographic; May 10, 2022; $35.00 U.S.; ISBN: 978-1-4262-2200-9; hardcover), an innovative guide that leads readers to discover the greatest park experiences the world has to offer, from the Rio Grande to Hawaii’s constantly erupting volcanoes. Featuring a foreword from Garth Brooks and jam-packed with need-to-know travel information — including the best scenic overlooks and hiking trails, practical wildlife-spotting tips and more — this inspirational collection takes readers inside all 63 national parks, as well as 37 state, recreational and city parks and green spaces. It showcases the immense beauty, diversity, surprises and wonder of each.