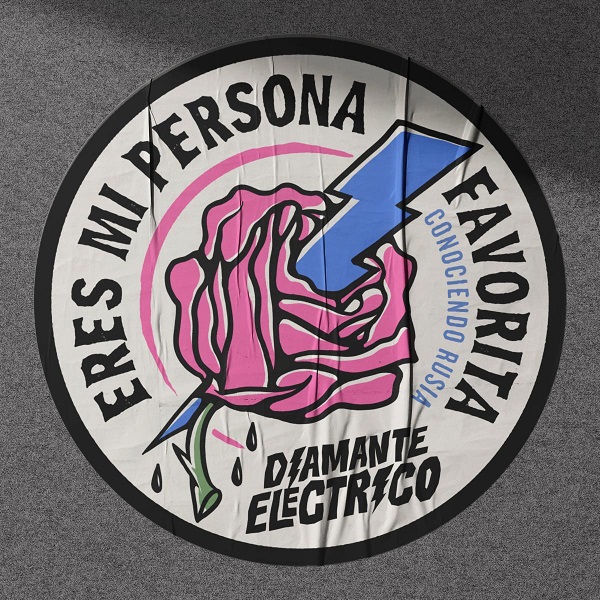 Diamante Eléctrico, the Colombian band led by Juan Galeano and Daniel Álvarez, announce their first collaboration from the long awaited album “Leche de Tigre” today, scheduled to drop in 2023. Featuring the Argentine rock band, Conociendo Rusia in the voice of Mateo Sujatovich, this is a rendition of Diamante’s latest single, “Persona Favorita” with some avant-garde rock sounds coming from Latin America’s southern cone that freshens up this reworked version of the song.

“Persona Favorita” is a love song, though not necessarily a romantic one, and is one of the most colorful songs in Diamante’s discography. The song, on one hand, celebrates what it means to be with the person who will always be good company in any type of situation. The song, released by Diamante Eléctrico in October 2022, has been well received by the public and it continues to be one of the band’s most played songs, quickly becoming the anthem for the band’s long-awaited Christmas tour in Colombia. This new version of the song offers an extra touch of Argentinean rock in the voice of Mateo Sujatovich, from Conociendo Rusia, which has been requested since Galeano and Álvarez wrote it. With this particular track, the group aims to transcend frontiers and discover new audiences that can find mutual connections across their music.

“It is an honor for us to have the support of Mateo from Conociendo Rusia on this version of ‘Persona Favorita’. Mateo represents the young blood of Latin American music and his vibe lends a unique touch to the song”. – Juan Galeano

Diamante Eléctrico recently announced their forthcoming tour in Colombia, named “A La Mierda La Navidad Tour”. This tour will start on a high note, with the most important show of their career: an unprecedented night at the Palacio de los Deportes in Bogotá, on December 7, 2022, to celebrate 10 years into the band’s music and career. The show will feature special guest appearances by Conociendo Rusia and Vicente García. Following the Bogotá event, they will also perform in Medellín and Cali among other cities.

During this tour they will be performing songs from their new album “Leche de Tigre” live for the first time, as well as the most renown songs throughout their career including, of course, songs from their latest record “Mira Lo Que Me Hiciste Hacer”, which received four Latin Grammy® 2021 nominations in the categories of Best Pop Rock Album, Best Pop Rock Song with “A Veces“, Record of the Year with “Suéltame, Bogotá“, and Song of the Year with “A Veces“. The album “Mira Lo Que Me Hiciste Hacer (Deluxe Edition)” was also nominated for the 2021 GRAMMYs® for Best Alternative or Latin Rock Album.

Led by Juan Galeano and Daniel Álvarez, the celebrated three-time Latin Grammy winning and GRAMMY® nominated band, celebrates their first decade together in the music scene this year. They have taken their infectious live performances to some of the world’s premier festivals such as Coachella, Austin City Limits, Lollapalooza, Vive Latino, SXSW, Rock Al Parque and Eurockenness, in addition to those that will now take part in their 2022 Solitarios Tour. They have also played with the Foo Fighters, The Rolling Stones, The Raconteurs and have collaborated with greats such as Billy Gibbons from ZZ Top, Enrique Bunbury, Kase O and Alison Mosshart from The Kills.