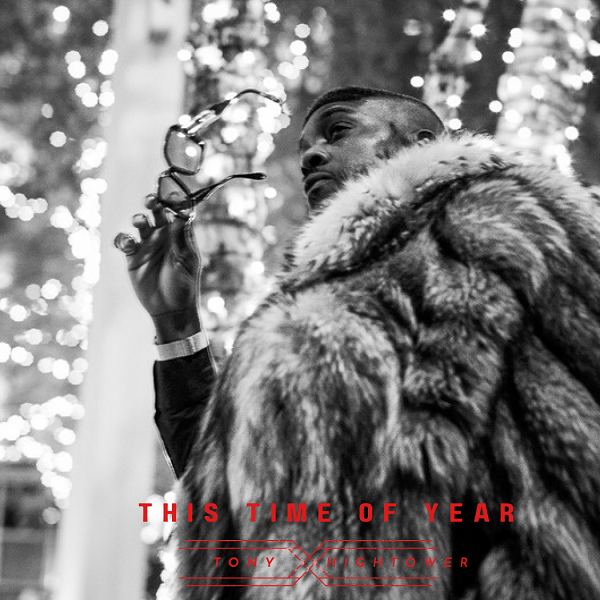 Available on all digital platforms!

Singer/Songwriter Tony Hightower is taking up the mantle to be a bridge that ushers R&B audiences into Jazz…Real Jazz. With years of experience as a musical performer and actor with familiar roots that place him firmly within the music’s firmament, Atlanta-native Hightower is still just getting started on this benevolent turn in his journey. And he is bringing a lot of young people with him.

His sophomore project, LEGACY, (released June 24th on Hightower Legacy Records) finds Hightower exploring Jazz vocal stylings from a dazzling prism of angles. The 10-song album moves confidently and assuredly from original compositions such as the soulful scat-laced “All to the Good,” the seductive Brazilian bossa nova of “Rendezvous” and the tender carnal Jarreau-esque love beg “I Need You” to swingin’ covers of Earth, Wind & Fire’s classic Skip Scarborough-penned “Can’t Hide Love,” a mean shuffle boogie groove through Al Green’s “Love and Happiness” and a smoldering upright bass accompanied tiptoe through the 1929 Andy Razaf standard “Gee, Baby, Ain’t I Good To You” made further famous in 1944 by one of Hightower’s greatest and earliest Jazz vocal heroes, Nat “King” Cole.

“I didn’t have a choice about doing this music,” Hightower confesses. “My mother, Theresa Hightower, lived her life onstage. She was a fiery and versatile vocal pro by age 16 and had me when she was 19. So, you could say I’ve been performing since the womb.” And though he did not know his father, Ralph Baker, well, the man’s DNA pulsed within his being as Hightower inherited the percussionist’s keen sense of fascinating rhythm, which led to Tony’s first pro gig at age 14 playing drums in the stage band for “The Dinah Washington Story” at the 14th Street Playhouse.

Growing up in Atlanta with a local legend mother who was a Funk-Rock singer but could sing anything and mentored many singers coming behind her, Tony learned music first-hand from Bobby Blue Bland and the Platters to Mother’s Finest, S.O.S. Band and Brick. And as mother Theresa evolved as a first-class singer – shifting her focus to Jazz that resulted in her historic residency at the Ritz Carlton Hotel in once fiercely segregated Buckhead. GA – so, too, did Tony’s taste begin to broaden. The artist that Theresa followed at The Ritz: Freddy Cole, Nat’s brother.

“My first jazz musical loves were Nat King Cole and Frank Sinatra,” Tony shares. “I always loved their cool, manly, sultry ways of wooing women in song. I loved Nat’s articulation and voice. He was my first jazz influence. When my mom followed behind Freddy Cole at The Ritz Carlton, he became a fan and then they became friends. Later, Mr. Cole called to ask me to accompany him on drums. By then, he was more like family, and I got tight with his grandson, Tracy. When I started making my transition into Jazz, I asked Mr. Cole for his tutelage. He gave me a lot of obscure artists and songs to learn. Then one day, he told me in earnest, ‘You need to start writing your own songs. We need new songs!’ I hesitated but by his nudging and God’s, I started on some songs that worked. ‘Kiss Me Baby’ was the first, then came ‘All Belong to You.’ They sounded so authentic, some serious local jazz cats were looking for them in the ‘fake book’ (the jazz songbook bible that all musicians and singers are expected to know by heart as a rite of passage). My hope was to create THE NEW STANDARD, thus the title/concept of my debut CD.”

Tony Hightower, a man of the Hip Hop/R&B generation, is known all over ‘The ATL’ for singing some of everything to put food on the table. The late, great Gerald Levert once stopped a session to call his legendry father Eddie Levert of The O’Jays to brag about him! He’s sung with Soul luminaries such as Lionel Richie, Jimmy Jam & Terry Lewis and OutKast. He’s sung memorable jingles for the Georgia Lottery, Coca-Cola and Kroger. As an actor, Tony has also been featured as one of the most valuable players in many of mogul Tyler Perry’s stage productions, movies, and TV series. However, the last 7 years have found him totally devoted to jazz, on a mission into bring the real deal to fresh young audiences in memory of Mr. Freddy Cole, at whose funeral he tearfully blessed in song. “In jazz, I have so much to learn, and I am loving the challenge! Sitting in, being seen, learning the vocabulary… On THE NEW STANDARD (2016), I worked hard to ensure that my tone was tight and that my songwriting mirrored the timeless songs of yesterday…with no over the top R&B vocal acrobatics. Before the pandemic, I performed at jazz festivals. I am 100% true to this artform.”

No statement could be truer with one listen to Hightower’s divinely varied latest offering, LEGACY, so titled as a tribute to his mother who sadly passed away from colon cancer. “When my mom passed, she said she did not want a funeral,” Tony states. “She wanted a party! So, we took over the Ray Charles Theater at Morehouse College for a visual and musical experience attended by the cream of Atlanta music society. She was honored with a proclamation from the city and October 29 was declared ‘Theresa Hightower Day.’ I sang ‘Here’s to Life’ a song my mother often closed her shows with. I didn’t know if I could get through it but went well…though I cried at the end. I knew I needed to record it.”

“My mother was my best friend,” says softly. “We used to always have this one debate. I’d say music is about melody. She insisted it was all about the lyrics.”

Hightower proves he is an ‘A’ student in both with a couple of LEGACY’s most shining highlights: the forlorn ballad “The Gift” and the sexy straight ahead swing of “The Doll” that sounds like Marvin Gaye living his best life in the jazzy world he longed for in his lifetime. Accompanying Hightower (who produced and arranged) are his working trio Kenny Banks Jr. on piano, Kevin Smith on upright bass and Henry Conerway III on drums, plus Rafa Pereira on percussion (“Rendezvous”), The Good Time Jazz Band Horns, (on four selections) and The David Davidson Ensemble Strings (on “The Gift” and “Here’s to Life,” arranged by Cheryl Rogers). Tony flaunts his drumming skills on “Rendezvous.” The album was co-produced and co-executive produced by Mr. John Beal.

​At a recent intimate performance during the Candlelight Series at Piedmont Park, Hightower sang a repertoire of all Ellington music show. Onstage, he spied a pair of pretty ladies who could not have been older than 22. His heart was gladdened.

“When I say these things, I really mean it. Charlie Wilson (lead singer of The GAP Band) really influenced me,” Hightower concludes. “What I’m doing is finding the ways that I can sing Jazz and still make it appropriate which I think is going to make me different as a jazz singer. Everything I have comes from God first.

I have the understanding of what it should be but then I have these other tools that are separate from what Traditional Jazz is. I’m figuring out the balance of where Jazz purists will respect it while people who don’t think they like Jazz dig it.”

As old folks say, by embracing high timeless standards yet refracting them in highly contemporary hues, Tony Hightower is finding himself in high cotton.