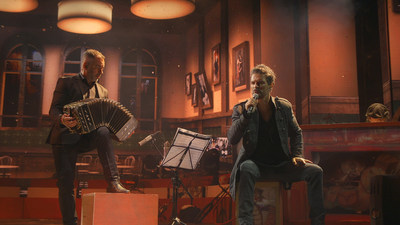 Covering 22 countries, and culminating in Arjona’s home country of Guatemala, the magical and historic Circo Soledad was #1 on the Latin Billboards “Hot Tours” list. More than two million viewers saw the singer perform a selection of songs from his latest album, along with some of his most beloved classics.

Music lovers will now be able to enjoy the best moments of this impressive and elaborate production, including magnificent audiovisual effects, a spectacular band and bewitching performances by jugglers, trapeze artists and clowns, all from the comfort of their living rooms. The concert also features documentary-style behind-the-scenes takes, providing a more intimate look at select moments from the singer’s life.

“We are very pleased to offer our viewers this incredible musical experience, showcasing the greatest hits of the phenomenal and award-winning artist, Ricardo Arjona,” said Francisco Gimenez, senior vice president and general manager of cable channels for Hemisphere Media Group, Inc., the network’s parent company. “Music is integral for Latinos, it’s part of our culture in both daily life and special occasions. We knew that Ricardo Arjona’s spectacular performance would resonate with our audience, and we are thrilled that through our programming, we can give them the opportunity connect to their roots and the artists they love.”

For more information and full schedules viewers can visit www.televisiondominicana.tv.