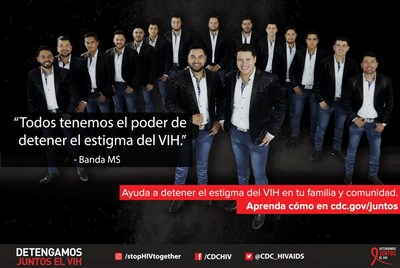 In order to help stop a public health problem that is disproportionately affecting the Latin community in the United States, Banda MS, together with the Pinyon Foundation and the Centers for Disease Control (CDC), launched a new edition of their successful campaign in Spanish to fight the stigma of HIV and to encourage the community to work together to help those with HIV obtain the health resources they need to live a healthier life

The multimedia campaign “Detén el estigma del VIH“ [Stop the stigma of HIV], whose national distribution through the Hispanic Communications Network – La Red Hispana is from October 7 to 27, as well as on its digital platforms and social networks, focuses on practical recommendations for identifying the language that deepens negative stigmas and discrimination due to HIV, offering ideas about how to better support people who are living with HIV.

As part of the new edition of this campaign, the CDC developed a useful guide on “lenguaje estigmatizante“ [stigmatizing language] to be able to speak openly about HIV and the stigma, in order to empower those living with HIV. When one talks about HIV, certain words might have a negative meaning for people at high risk of contracting HIV, or those who already have it. The guide contains practical advice about choosing appropriate language that is supportive and not stigmatizing when the matter is discussed.

The campaign also highlights the role of each person in stopping the stigma of HIV, and the voice of people living with HIV, as well as their family and friends. Campaign participants share their stories and encourage everyone to work together to stop HIV.

“There is a negative stigma and incorrect negative beliefs about people living with HIV, and as a community it is our responsibility to help so that we can all live healthier lives,” said Oswaldo Silvas, the spokesman for Banda MS, in one of the campaign’s videos.

The campaign “Detén el estigma del VIH” includes distribution of Public Service Announcements through the network of broadcasters affiliated with La Red Hispana, as well as interviews with leaders of organizations that are in the fight against AIDS, digital multimedia resources on the web page of La Red Hispana, as well as messages on digital platforms and social networks: Facebook, Twitter and Instagram, and on its flagship programs such as Bienvenidos a América, la Dra. Isabel, En Privado, con el Dr. Eduardo López-Navarro and Encendío con Pedro Biaggi, among others.

For more information on the campaign in Spanish, please visit La Red Hispana.